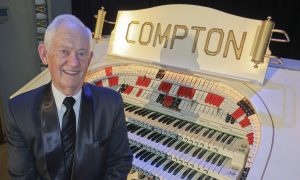 Tony Fenelon excelled in two diverse careers concurrently. A Science graduate from Melbourne University, he went on to become head of the department of biomedical engineering at the Royal Melbourne Hospital where he was credited as the joint designer of Australia’s first implantable cardiac pacemaker. His other career was as a master of the keyboard; the piano, organ and theatre organ. From resident theatre organist at the Regent Theatre in 1965, his career has taken him on more than thirty world tours.

You can hear him in conversation with Loretto Perkins on Reflections when he talks about his two careers (1st broadcast 29 July 2018).