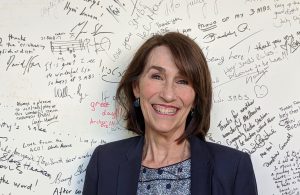 Radio listeners well know the beautiful voice of Mairi Nicolson, who has presented music programs for 40 years. Mairi trained as a music teacher before she moved to the ABC. In 1988 she moved to the UK where she worked for the BBC and also continued her involvement with live performances, presenting the BBC Proms and touring with the BBC Orchestra. She returned to Australia in 1997 and is now based in Melbourne, where she continues her radio work. She has added other strings to her bow, taking many music tours to Europe and also training musicians in media skills. Mairi shares her experiences of working with well known musicians and discusses her favourite pieces of music with Kiera Stevens. You can hear their conversation by clicking on the arrow below.  (This program was first broadcast on 13 May 2018, and was repeated as part of the Reflections Summer Series on 23 December 2018.)