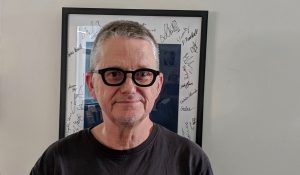 Johannes Klabbers was born in Holland and moved to England as a teenager. In the 1970s he played guitar and sang in a rock group, before moving to Australia where he studied art. After completing a PhD he lectured in art at a regional university for many years, before becoming disenchanted and looking for a more meaningful life. He became a volunteer intern in pastoral care, wanting to provide support to terminally ill patients, who were not religious. He worked with patients of many different beliefs and later wrote a recollection of that life-changing year, in a book I Am Here. In Reflections Johannes talks to Kiera Stevens about his life, belief, death and dying and what makes life meaningful to a non-believer. (Interview first broadcast 21 October 2018).