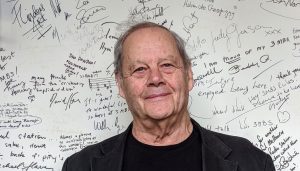 Bruce Beresford is one of Australia’s best known film directors with over 30 feature films to his credit including Don’s Party, Breaker Morant, Paradise Road, Mao’s Last Dancer and the recently released Ladies in Black. His work has also included directing theatre and opera, the latter ranging from Puccini’s Girl of the Golden West at the invitation of Gian Carlo Menotti for the Spoleto Festival in South Carolina, to Andre Previn’s A Streetcar named Desire and Benjamin Britten’s Albert Herring and Peter Grimes. He was recently in Melbourne to direct Melbourne Opera’s Otello by Rossini.  Bruce Beresford talks to Loretto Perkins about his life and career and you can hear their conversation by clicking on the arrow below. (Interview first broadcast on Reflections on 3MBS on Sunday 11 November.)